During COVID-19 Crisis, We Must Prioritize the Release of Pregnant People

This piece was first published on USA Today.

Andrea Circle Bear was 30 years old and had only recently given birth when she died of COVID-19. Circle Bear was incarcerated for a drug-related charge at the time of her death. She spent the final weeks of her pregnancy in a local jail and then a federal prison, spaces that are known hotbeds for virus transmission — and it’s likely in one of these places that she contracted the virus. She shared the planet with her baby for only 28 days before she passed.

While much attention has rightly been given to the risks of COVID-19 in prisons, jails, and detention centers, the risks to pregnant and postpartum women like Circle Bear have largely been overlooked. Pregnancy alone does not appear to be a risk factor for severe illness from COVID-19, but the data is clear that incarceration compounds the dangers associated with pregnancy. They are much more likely to get infected in prison or jail than in the community.

People who are incarcerated also have higher rates of underlying medical conditions —as Circle Bear did — that put them at increased risk of severe COVID-19 illness. Some suggest that people in prisons or jails who have symptoms of COVID-19, including those who are pregnant, be placed in solitary confinement as a form of quarantine. But solitary confinement can be especially damaging to prison or jail populations that are pregnant  or have recently given birth because it can limit access to timely, adequate medical care.

During this time of rampant coronavirus spread and attempts at social distancing to avoid infection, it’s imperative that pregnant populations are prioritized for release and diversion from prisons, jails and detention centers.

The situation is dire. 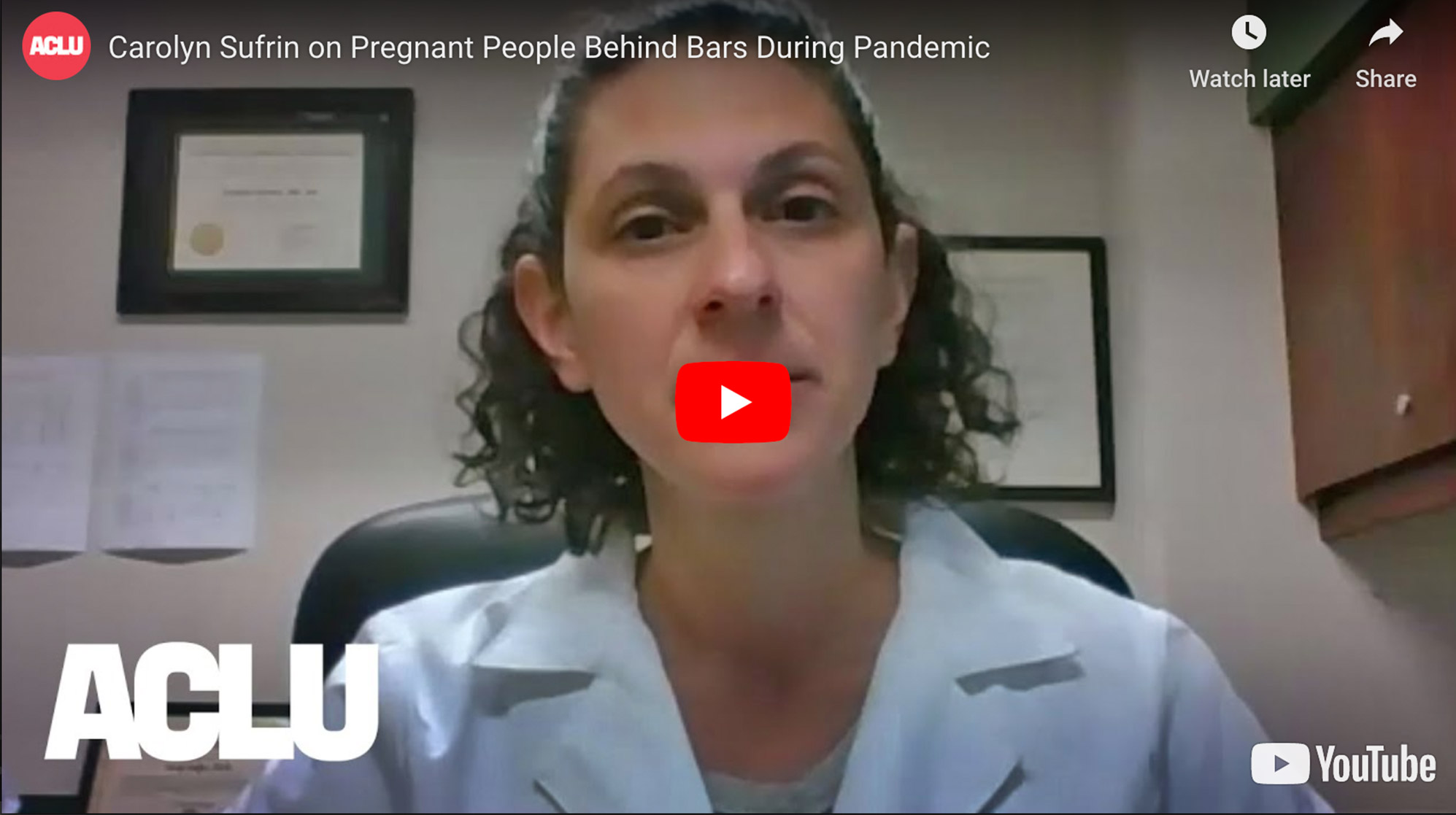 A new study estimates that at least 72% of people held in immigration detention centers are likely to get infected within the next 90 days. And the danger in jails and prisons is equally serious: Prisons that have conducted universal testing have found that an overwhelming number of the people they incarcerated are positive for COVID-19. One model estimates that 100,000 more people could die from COVID-19 than current estimates indicate if jail populations are not immediately and dramatically reduced.

A recent study that I conducted as a doctor and Johns Hopkins OBGYN researcher estimated that from 2016 to 2017, there were nearly 3,000 admissions of pregnant women to U.S. prisons and 55,000 to jails. Thousands are at risk for contracting COVID in custody and exposing their babies to danger.

As a physician and an attorney who work with populations that are pregnant and incarcerated, we have seen dangerous variability in their care. There is a dearth of protections for them, leaving many vulnerable to inadequate medical care and abuse: loss of reproductive choices, shackling during childbirth and solitary confinement, as well as the inevitable separation from their newborns.

The COVID-19 pandemic is terrifying for anyone who is pregnant. Those who are incarcerated are wrestling with the added COVID risks of their environment, such as close quarters, lack of adequate cleaning and limited protective equipment. These fears only exacerbate the existing dangers and stressors of being pregnant while incarcerated. Pregnancy, incarceration and COVID are a recipe for both increased medical risks and psychological trauma.

Having coronavirus also may mean being separated from newborns at the hospital. This would be a difficult experience for any new parent, but it is particularly devastating and harmful for those who are incarcerated because they are quickly sent back to the prison or jail, unable to see or hold their infants. And since prisons and jails have suspended visitations as a COVID prevention measure, the few opportunities new parents might have had for contact visits are gone. These traumatic separations interfere with their ability to bond with their children and cause severe emotional harm — for both the parent and the child.

Advocates and officials have made tremendous and rapid strides in depopulating prisons and jails, often focusing on releasing those who are medically vulnerable to COVID-19. We have seen success in some places. In North Carolina, more than a dozen pregnant women were moved out of prison last month. But more efforts are needed.

The situation for pregnant populations in our nation’s jails, prisons and detention centers has long been serious. But with COVID-19, it is now an emergency.

Circle Bear’s child should never have been left motherless, and she should not have had to face the dangers of incarceration, where she contracted COVID-19.

We must and we can prevent such senseless suffering.

Dr. Carolyn Sufrin is an OBGYN and anthropologist at Johns Hopkins School of Medicine and the author of “Jailcare: Finding the Safety Net for Women Behind Bars.”