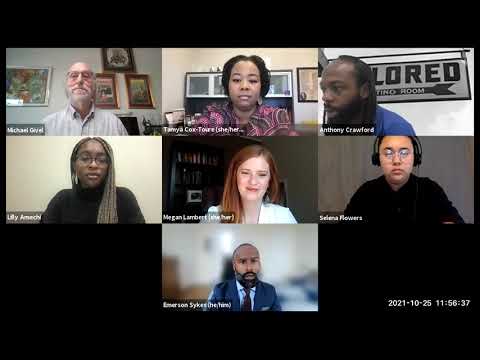 OKLAHOMA CITY — A multiracial group of students and educators filed a lawsuit today challenging an Oklahoma classroom censorship bill, HB 1775, which severely restricts public school teachers and students from learning and talking about race and gender in the classroom.

The lawsuit was filed by the American Civil Liberties Union, ACLU of Oklahoma, the Lawyers Committee for Civil Rights Under Law, and pro bono counsel Schulte Roth & Zabel LLP on behalf of plaintiffs the Black Emergency Response Team (BERT); the University of Oklahoma Chapter of the American Association of University Professors (OU-AAUP); the Oklahoma State Conference of the National Association for the Advancement of Colored People (NAACP-OK);  the American Indian Movement (AIM) Indian Territory on behalf of itself and its members who are public school students and teachers, a high school student, and Oklahoma public high school teachers Anthony Crawford and Regan Killackey.

Oklahoma is one of eight states across the country that have passed similar laws aimed at censoring discussions around race and gender in the classroom, and this is the first federal lawsuit facially challenging one of these statewide bans. The lawsuit argues HB 1775 not only chills students’ and educators’ First Amendment right to learn and talk about these issues, but it also prevents students from having an open and complete dialogue about American history — one that includes the experiences and viewpoints of all historically marginalized communities in this country.

“All young people deserve to learn an inclusive and accurate history in schools, free from censorship or discrimination,” said Emerson Sykes, staff attorney with the ACLU Speech, Privacy, and Technology Project. “HB 1775 is so poorly drafted — in places it is literally indecipherable — that districts and teachers have no way of knowing what concepts and ideas are prohibited. The bill was intended to inflame a political reaction, not further a legitimate educational interest. These infirmities in the law are all the more troubling because the bill applies to public colleges and universities, where the First Amendment is especially protective of academic freedom.”

“H.B. 1775 is an unvarnished attempt to silence the experiences and perspectives of Black, Indigenous, and LGBTQ+ people, and other groups who have long faced exclusion and marginalization in our institutions, including in our schools,” said Genevieve Bonadies Torres, associate director of the Educational Opportunities Project with the Lawyers’ Committee for Civil Rights Under Law. “The law directly violates the Fourteenth Amendment’s command that governmental actors do not engage in racial discrimination. Every student in Oklahoma deserves an equitable education that reflects the rich diversity of the state and provides a full, fact-based discussion of the state’s checkered history of racism, sexism, discrimination.”

The Oklahoma bill’s lead authors in the state House and Senate declared the bill’s intent was to prohibit conversations related to “implicit bias,” “systemic racism” and “intersectionality,” among other concepts. The “banned concepts” were directly excerpted from President Donald Trump’s failed Executive Order 13950 that similarly sought to restrict speech of government contractors. The lawsuit argues HB 1775 is an unlawful restraint on freedom of expression by silencing students’ and educators’ speech through its vague and overbroad terms. It also intentionally targets and denies access to equitable, culturally relevant teaching and ideas that reflect the history and lived experiences of Black, Indigenous, and other people of color; women and girls; and LGBTQ+ students.

“The Black Emergency Response Team (BERT) is a collective comprised of Black student leaders whose mission is to confront racism and various oppressive structures, including this bill that is a direct attack on the education experience of the Black community specifically, and marginalized communities at large on campus,” said Lilly Amechi, plaintiff and representative for BERT. “We believe all students deserve to have a free and open exchange about our history — not one that erases the legacy of discrimination and lived experiences of Black and Brown people, women and girls, and LGBTQ+ individuals.”

As a result of the bill’s passage, school districts in Oklahoma have instructed teachers to no longer use certain terms, including “diversity” and “white privilege” in their classrooms, and have removed seminal works of literature such as “To Kill a Mockingbird” and “Raisin in the Sun” from its list of “anchor texts.” Multiple Oklahoma public schools have also scaled back or eliminated their diversity, equity, and inclusion trainings for teachers and strategic plans. Plaintiff Regan Killackey was instructed to avoid certain concepts, phrases, and books in his curriculum related to race and is no longer able to lead his students in educational conversations about race and gender.

“As someone who has experienced an incredibly privileged teaching career in Edmond, I am acutely aware of the need this community, and all communities, have for healthy analysis, critical conversations, and effective communication,” said Regan Killacky, Edmond Public Schools teacher. “H.B. 1775 limits my ability to teach an inclusive and complete history within the walls of my classroom, ultimately restricting the exact type of learning environment all young people deserve — one free from censorship or discrimination.”

The ability for educators and students to have honest conversations around race, gender, and our country’s history in schools carry particular importance in Oklahoma, whose history includes the 1889 Land Runs, “Indian” boarding schools, the 1921 Tulsa Massacre, and racially segregated schools.

The groups are asking the court to declare the bill unconstitutional under the First and 14th Amendments and are urging the court to issue a preliminary injunction that would put an immediate stop to the bill and immediately allow students and educators to have full and truthful discussions around race and gender in the classroom.

Below are additional comments from:

Mary Topaum, director of the American Indian Movement Indian Territory:
“Denying Oklahoma students access to a diversity of experience and ideas that includes Indigenous perspectives inhibits future generations from developing the cross-cultural understanding, compassion, and mutual respect that is necessary to build bridges and thrive in our increasingly diverse state. H.B. 1775 seeks to further sanitize the few voices of historically marginalized communities that exist within the curricula and to discourage students and educators from engaging in courageous and urgently needed conversations around race, inequity, and systemic oppression.”

Michael Givel, OU-AAUP president: “The wording of this H.B. 1775 directly curtails academic freedom in public universities in Oklahoma. It has a chilling effect on academic freedom as it can and has purposely targeted Oklahoma public school teachers and administrators from imparting a complete history in our schools, free from censorship or discrimination. Curriculum decisions and what is taught in a college classroom for the promotion of a balanced education is unequivocally protected from outside political requirements and interference. University professors are not sock puppets for the biased ideological agendas of elected politicians.”

Sara Solfanelli, special counsel for pro bono initiatives, Schulte Roth & Zabel: “Schulte Roth & Zabel is proud to partner with the ACLU, ACLU-OK, and Lawyers’ Committee to defend academic freedom, protect the fundamental right of students to learn, and ensure that schools have the freedom to create an inclusive curriculum and environment. The state-sanctioned censorship that H.B. 1775 represents was wrong a century ago when directed against the teaching of evolution, and it is just as wrong today.”

This lawsuit was filed in the United States District Court for the Western District of Oklahoma.