Happy fourth week of session! Bills have until March 3rd to make it out of its committee of origin and onto the floor. Public Schools Week at the Capitol kicked off with educators, faith leaders, administrators, and students celebrating the importance of funding our public schools in the midst of all the voucher bills being pushed through committee. Last week, we saw six anti-abortion bills make it through the senate committee in a span of two days and this week, we are closely watching a federal court case that could determine the future of executions in Oklahoma. This legislative session is nothing we’ve seen before, but we continue to fight.

Keeping an Eye on:

SB 1503 & HB 3700 are identical bills.  They are Texas copy-cat bills that ban abortion after 6 weeks and will deputize Oklahomans with no connection to the patient to sue anyone who provides abortion care or helps someone obtain an abortion. The emergency clause means that the bill could be fast tracked and would become effective upon the Governor’s signature.

Author: Sen. Daniels & Rep. Russ| Last Action: Passed Committee | Next Action: Headed to the Floor
ACTION ALERT: Call your senator to vote no on SB 1503. | Call your representative to vote no on HB 3700.

HB 3240 would be a ban on gender affirming healthcare for minors. Medical experts agree: Gender-affirming care is medically necessary care that can be life-saving for transgender youth. Medical decisions belong to trans youth, their parents, and their doctors.

HB 4015 would allow anybody to make a complaint of a civil rights violation with the Attorney General’s office if they believe a public school or higher education institution has discriminated against them. This bill has the potential to be used against educators who discuss “divisive” topics related to race, gender, or sexuality.

Oklahomans have watched as The State of Oklahoma has murdered 116 people since 1990. Four of which were killed in just the last five months and four of which were flawed executions. What many don’t know is that the state has been in litigation with the federal court over Oklahoma’s lethal injection protocols, since 2015 after the botched execution of Clayton Lockett in 2014.

In 2015, Oklahoma Attorney General Scott Pruitt and Governor Mary Fallin put all Oklahoma executions on an indefinite hold after the failed execution of Charles Warner. The current rush to return, led by unelected Attorney General John O'Connor, is especially suspect considering the lack of transparency around the current execution protocols and given a pending federal court case, which calls into question the constitutionality of the use of midazolam, currently used in Oklahoma’s three-drug lethal injec­tion process.

The ACLU of Oklahoma has led a campaign for the last four months that calls on Governor Kevin Stitt to Reinstate the Moratorium on Executions and issue a stay on the remaining execution dates immediately and until the judiciary has made a final decision on Oklahoma’s lethal injection protocols.

Today, the Federal Court trial will begin, with Judge Friot as the presiding judge. This federal trial will challenge the constitutionality of Oklahoma’s three-drug lethal-injection process and the ruling will set a precedent for capital punishment in our state moving forward. The Trial is expected to last approximately 5 days and is being held at the United States Courthouse 200 N.W. 4th Street OKC in courtroom 302. The trial is open to the public, up to COVID safe capacity. Spectators must have ID and wear a mask. Cell phones are not permitted.

Don't Forget to Sign Up for Our Rapid Response Team

This team will help fight for civil liberties by taking critical, immediate actions to put pressure on your elected officials. Sign up here!

Meme of the Week

The Oklahoma Legislature has a way of overwhelming those who care about civil liberties as much as we do. This article is a reminder to take a moment to laugh or smile, even if it’s to keep us from crying! Enjoy our Meme of the Week provided by @OKPoliticalMeme. 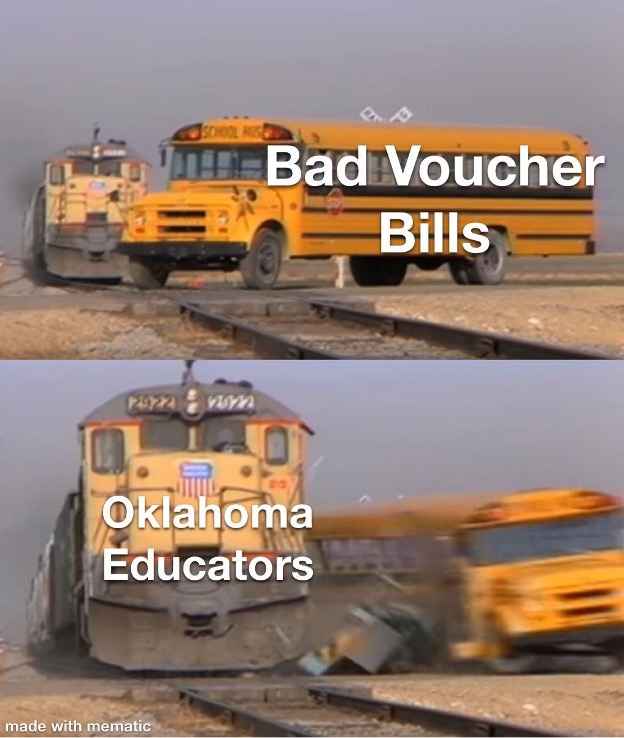