OKLAHOMA CITY – A non-profit organization that pushed for the development and passage of Oklahoma City’s anti-panhandling ordinance has a $190,000-per year contract with the city of Oklahoma City, records obtained by the American Civil Liberties Union of Oklahoma show.

Those same records show that city officials worked hand-in-hand with the non-profit Neighborhood Alliance to develop and mobilize support for the anti-panhandling ordinance, but at the same time forced another city-funded nonprofit, the Homeless Alliance, to apologize for voicing opposition to the proposal.

Records show that, over the past decade, the city has paid the Neighborhood Alliance a total of $1,001,090.

Criticism on both sides

Controversial from the beginning, Oklahoma City’s anti-panhandling ordinance drew complaints from several groups and two members of the city council. Last December Oklahoma City Councilman Pete White said he opposed the proposal and complained about the Neighborhood Alliance’s lobbying efforts in support of the ordinance.

“I find it deeply concerning,” White said. “I’ve looked at the emails I received from those that support it. I’m offended by those (groups) who are taking money from the city and telling us this is the proper way the handle it. I’m deeply offended by it.”

Records show that city staff and Georgie Rasco, the Neighborhood Alliance’s executive director had, for almost a year, worked together to help develop and support the ordinance.

However, sources say that, at the same time, city officials harshly criticized a letter sent by Dan Straughan, the executive director of the Homeless Alliance.

Those sources, who asked not to be identified for fear of reprisal, said City Manager Jim Couch’s office “blistered” Straughan because Straughan sent a letter to members of the city council, urging council members to vote against the anti-panhandling ordinance.

“Dan got his butt chewed pretty good,” the source said. “He was told because the Homeless Alliance got city money and because of that, they needed to shut up. But the city never said anything to the Neighborhood Alliance and they, too, are funded by public money. ”

A letter dated Sept. 9, shows that Straughn did, in fact, ask members of the city council to consider voting ‘no’ on the anti-panhandling ordinance.

But just one week later, Straughan abruptly apologized for the letter in an email, saying, “I regret the closing of that letter which urged you to vote a certain way on the ordinance.”

Straughan declined to comment. However, other sources say that the city manager’s office wanted to stop criticism of the anti-panhandling proposal and pushed Straughan to be quiet.

“Our attorney strongly advised me not to reply due to the ACLU’s lawsuit,” Yager wrote. “Sorry about that.”

Records obtained by the ACLU of Oklahoma show no evidence that the city took any action against the Neighborhood Alliance, even while its efforts became both more sustained and more expansive, reaching out not just to the City Council but directly to members of the public.

“The city manager’s office liked what the Neighborhood Alliance had to say,” the source said. “But they didn’t like what Dan said. That’s why they told him to shut up.”

During the September 15 council meeting White referenced Struaghan’s letter, questioning why he was forced to apologize.

“I got an apology letter from one of them that was apologizing for stating his opinion,” White said. “I thought ‘who jerked his chain?’ I mean, why would he feel like he needed to apologize? That’s the business he is in. I really didn’t like that. There’s some reason that he felt he needed to apologize. I don’t want to know at this point. I am afraid of what I might find out.”

The ACLU of Oklahoma questioned the actions of both the Neighborhood Alliance and city officials, calling the lack of transparency and the push to shut down criticism of the ordinance unethical and insulting. 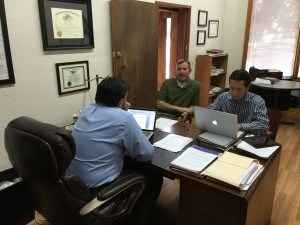 “Records show that city officials simultaneously worked to manufacture support for their anti-panhandling proposal while using their power to silence criticism,” said Brady Henderson, ACLU of Oklahoma Legal Director. “That breach of the public trust is both unethical and insulting to the citizens of Oklahoma City. Worse yet, the city’s manipulation of the panhandling ordinance debate occurred almost entirely behind the scenes. There was no disclosure during the debate over the ordinance.”

The Neighborhood Alliance bills itself as an organization that is “successful at helping residents create sustainable change through its educational and support programs.”

For more than a year, Rasco helped organize meetings and sent dozens of emails to neighborhood groups and other individuals and organizations, urging them to support the ordinance.

Last September, Rasco emailed members of the Oklahoma City Council, urging them to support the ordinance. Rasco’s email focused on the image caused by panhandlers.

“Panhandling first and foremost degrades the person who is relegated to standing on a street corner to ask for money. (It) hurts our businesses, our property values and perceived or real safety issues abound,” she wrote.

Rasco also wrote that shoppers in the 23rd and Pennsylvania Avenue area said “they no longer supported” the businesses at that intersection due to alleged harassment from panhandlers.

“This clearly shows that the City of OKC needs to react to a serious problem,” she wrote. “They cannot allow a small group of territorial panhandlers to ruin property values, devalue businesses and chase away a vital customer base.”

However, while Rasco’s email stressed that shoppers said they would stop doing business with merchants in the 23rd Street area, she did not release the names of any citizens who made complaints, nor did she say if those citizens were concerned about their safety.

None of the emails disclose the financial relationship between her organization and Oklahoma City’s municipal government.

Rasco did not respond to emails from the ACLU of Oklahoma requesting comment.

Kristy Yager, the city’s spokesperson, defended the contract with the Neighborhood Alliance, saying Oklahoma City municipal government contracts with many nonprofits to provide specific services on behalf of the city.

“The city’s interest is that those services are provided in accordance with the contract and nothing else,” Yager wrote in an email to ACLU of Oklahoma. “The city has no interest in influencing the activities of nonprofit organizations outside of the contracted services.”

Most non-profits, she said, have boards that include various community members who “may take positions on issues of local, state and national matters.”

And city funds, Yager said, are not the only source of funding for nonprofits.

Henderson said the Neighborhood Alliance should have been more transparent and open about its connection with Oklahoma City’s municipal government during its campaign for the panhandling ordinance.

“The Neighborhood Alliance didn’t mention they were receiving thousands in city money while they were campaigning for the anti-panhandling ordinance,” Henderson said. “Both the alliance and city officials should have disclosed their funding deal. Keeping citizens in the dark about the potential conflict of interest deprives them of the ability to evaluate the alliance’s lobbying and public statements in the context of its close and lucrative relationship with the city government.”

Following strong support from the Neighborhood Alliance, Oklahoma City’s anti-panhandling ordinance was adopted by a 7-2 vote last December. The ordinance is now the subject of a federal lawsuit.