OKLAHOMA CITY -- Oklahoma's controversial monument to the 10 Commandments, which had stood on the northeast side of the State Capitol Building, was removed Monday evening, after a protracted legal battle.

John Estus, spokesman for the Office of Management and Enterprise Services, told the Associated Press the state would pay the $4,700 fee to remove the monument.

Brady Henderson, legal director for ACLU Oklahoma praised the way state handled the removal of the monument. "The removal went cleanly and without event, just like we hoped it would," Henderson said. "Now, for the first time in more than two years, Oklahomans can go to their state Capitol without their government telling them what to believe." 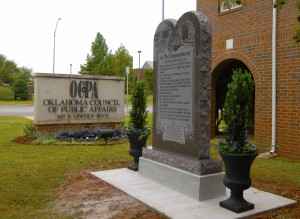 ACLU of Oklahoma filed a lawsuit in 2013, seeking the monument's removal from state property.

The monument's new home isn't far away from its original location. Today, the monument stands in front of the office of the Oklahoma Council of Public Affairs, just a few blocks south of the Capitol building on Lincoln Boulevard.

“I am completely appalled and disappointed that the judiciary has decided to go against the will of a majority of Oklahomans and against the precedent set by the U.S. Supreme Court that it is constitutional to display the Ten Commandments on public property," Bennett said in a media statement. "I’m perplexed about what the justification is for ordering the state to remove the monument."

The monument was purchased by state Rep. Mike Ritze, R-Broken Arrow as a gift to the state.