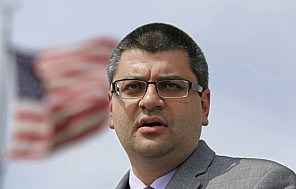 ACLU Oklahoma executive director Ryan Kiesel said Adam Soltani and CAIR-OK were chosen to receive the Angie Debo Award because of their efforts to protect the rights of Oklahoma’s Muslim community and to ensure the religious liberty rights of all Oklahomans.

The award is named in honor of the writer, historian, and civil rights advocate Angie Debo, who relentlessly pursued justice in cooperation with the ACLU of Oklahoma during the late 1960's and 1970's. It is the highest award presented by the ACLU of Oklahoma and has been presented annually since 1971 for outstanding achievement in the fight for civil rights and civil liberties.

“Throughout our nation’s history, religious minorities have been marginalized and persecuted for their beliefs,” Kiesel said. “Politicians continue to use religion as a weapon to divide Americans against themselves and those demagogues often fan prejudicial flames that smolder well beyond a single election. We routinely teach our school children that religious liberty is at the core of American principles and ideas. However, the right to choose how one believes or whether to believe at all is not innate. It must be continually fought for and won by each and every generation of Americans. Today, whether they realize it or not, all Oklahomans are the beneficiaries of the brave work done by CAIR-OK.”

Soltani will receive the award during ACLU Oklahoma’s Annual Meeting on Saturday. Soltani will also deliver the keynote address for the meeting.

Kiesel said the ACLU of Oklahoma remains at the center of the civil rights movement in the United States. He said the organization’s annual meeting is an opportunity for members of the ACLU to reflect on where we have been, how far we have come, and to reaffirm a commitment to realizing greater liberty, freedom, and justice for all Oklahomans.

ACLU Oklahoma’s annual meeting will be held at noon, April 16 at the Ralph Ellison Library, 2000 NE 23rd Street in Oklahoma City.  The meeting is free and open to the public; however seating is limited.