OKLAHOMA CITY – Officials with the American Civil Liberties Union of Oklahoma filed a lawsuit against Governor Mary Fallin's office Monday, seeking documents about how Fallin and her staff have handled the execution of two condemned inmates and how the governor addressed the state inspection of long-term care facilities.
The lawsuit, filed in Oklahoma County District Court, comes just weeks after Fallin’s office released more than 40,000 pages of documents, most of which were copies of emailed newsletters or were heavily redacted.
“Apparently, it takes a court action to get correct records from the governor’s office,” Brady Henderson, ACLU Oklahoma Legal Director, said. “So we’re going back to court.”
Henderson said the ACLU lawsuit was filed on behalf of The Oklahoma Observer, a magazine that focuses on public policy and politics, and A Perfect Cause, a nursing home watchdog group.
Arnold Hamilton, editor of the Oklahoma Observer, said he has been waiting since July of 2014 for records about the executions of Gary Thomas Allen and Brian Darrell Davis. Both men had been recommended for clemency by the state's pardon and parole board.
"It's appalling  that the governor's office has failed to respond to our request for records after 17 months," Hamilton said. "The state has no greater authority than carrying out a death sentence. The citizens of Oklahoma deserve to know what went into the governor's decision making when she rejected the pardon and parole board's rare recommendation for clemency. It too bad that we have to go to court to force the governor to follow the law."
Wes Bledsoe, founder and chairman of A Perfect Cause, said it was sad that Fallin had to be forced to follow the law. Bledsoe said he made his records on May 13, 2014.
"This one of the problems we've been trying to resolve since 2014," Bledsoe said. "We believe state officials are in violation of over 40 federal and state laws and regulations. The urgency in this request is about the systemic failures by the state's nursing home industry. That has resulted in the suffering and death of thousands and thousands of Oklahoma nursing home residents."
Bledsoe said the governor's actions defy common sense. "That's why we're trying to discover what, if anything, the governor has been doing to protect the state's most vulnerable citizens," he said. 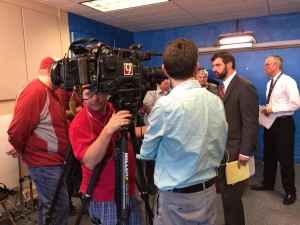 Alex Weintz, spokesman for Gov. Mary Fallin, speaks to the media following a press conference conducted by ACLU of Oklahoma.

Fallin's spokesman, Alex Weintz, said the governor's office has released 357,000 of pages of documents -- requested under the Open Records Act -- since 2012. "We believe that's not only more than every other Oklahoma governor but every other Oklahoma governor combined," he said. "The quantity and the scope of the requests is, frankly, unprecedented."
Weintz said Fallin's office takes its obligation to comply with the Open Records Act seriously but added that Fallin's staff feels they have an obligation to read every document requested prior to filling a request.
"We believe we have to read those documents before we can deliver them," he said.
On Oct. 7, Fallin’s office released 41,697 pages of what it described as ‘non-privileged and privileged documents’ regard the execution of Clayton Lockett. The request had been made more than a year and a half ago.
The document release came during the same week attorneys for the Tulsa World newspaper and former Tulsa World Enterprise Editor Ziva Branstetter filed a motion to compel the governor’s office to release its execution records.
Not long after the motion was filed, the governor’s office released its records.
A letter, signed by Steve Mullin’s, Fallin’s attorney, was included with the four compact discs that contained the documents. Mullins said Fallin’s office had "thoroughly reviewed all correspondence, briefings, presentations and memorandums sent and received and records created by all levels of the governor’s office."
The letter said Fallin’s office had identified 383 pages of privileged material but had waved confidentiality on 344 pages of the document – leaving only 39 documents and 54 pages of source material.
However, what Mullins’ letter didn’t say was just how many of the 41,697 documents were duplicates and how many of the documents had information redacted.
An analysis by the ACLU of Oklahoma shows hundreds of those documents include page after page of duplicated newsletters and hundreds upon hundreds of pages of media stories, gathered by governor’s media clipping service.
For example, the first 677 pages of the governor’s document release contains duplicated copies of Oklahoma Policy Institute newsletters, page after page of Google Alerts, media alerts from Oklahoma City television station KFOR, clippings from the Republican Governor’s Association and political clippings from Politico, a Washington, D.C. based-newsletter.
ACLU Oklahoma Executive Director Ryan Kiesel called the records release “a poor example of transparency in Oklahoma government.”
“For a records release that had more than 41,000 pages of documents, there was very little information provided to the public,” Kiesel said. “I’m disappointed the governor’s office would think the media would be satisfied by pages of newsletters and media clips.”
Henderson said ACLU Okahoma would continue to push for records from the governor.
“Wes Bledsoe and the Oklahoma Observer are still waiting,” Henderson said. “So we’re going to ask the courts to force the governor’s office to release the records. It’s time for our elected officials to start following the state’s Open Records Act.”

ACLU of Oklahoma Statement on Advancement of Senate Social Media ...

ACLU of Oklahoma Statements on Victory in Oklahoma City Anti...

Proposed Policy Regulating the Use of County Property for Free...

ACLU of Oklahoma Condemns the use of Excessive Charges to Silence...

Statement from the ACLU of Oklahoma in Response to the Arrest of...

Statement from the ACLU of Oklahoma in Response to Protesters’...