Controversial 10 Commandments Monument to be removed from Capitol grounds by October 12, officials say

OKLAHOMA CITY -- The Oklahoma Capitol Preservation Commission voted 7-1 Tuesday to direct the Office of Management and Enterprise Services to remove a controversial monument of the 10 Commandments from the grounds of the state Capitol building.

One member of the commission, Lou Kerr, abstained from voting.

"Because the commission's chair and vice chair have both resigned recently for reasons unrelated to the monument and new officers had not been nominated or elected, we were advised by the attorney general's office that a senior member (of the commission) could preside," Edmondson said. "The most senior member, having declined, I as next in line, agreed to preside."

The monument, donated by state Rep. Mike Ritze, R-Broken Arrow, was the target of a legal challenge filed by the ACLU of Oklahoma. On Sept. 11, following a directive by the Oklahoma Supreme Court, Oklahoma District Court Judge Thomas Prince ordered the state to remove the monument from the Capitol's grounds by Oct. 12.

John Estus, OMES spokesman, said his agency would be working with Rep. Ritze and the Oklahoma Highway Patrol to remove the monument.

"The Highway Patrol has some concerns about the monument that we want to address," he said. Estus said his agency would oversee the monument's removal. 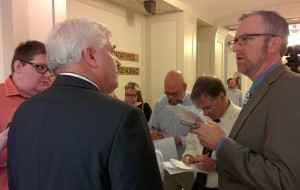 Tuesday's vote drew complaints from former state Representative Mike Reynolds, R-Oklahoma City. Reynolds attended the meeting and said neither the commission nor the court had the authority to remove the monument. "The court doesn't have the authority to order the commission to do anything," Reynolds said. "We have a rule of law and the court is not supreme. Particularly the Oklahoma Supreme Court."

Brady Henderson, Legal Director for ACLU of Oklahoma, said the vote was one of the last steps in the process of removing the monument.

"Because this monument has been such a lightning rod of controversy, it's not surprising to hear fervent arguments and strong words," Henderson said. "But it's important to remember that we have a constitution and a system of laws for settling disputes and it's important that we respect that system even when we don't all agree with the outcome."