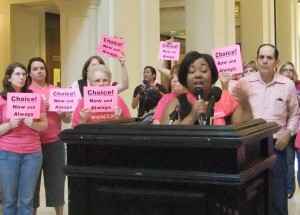 Deputy Director Tamya Cox spoke at the 2011 Pink Wave held at the State Capitol on May 12, 2011. Cox, a rigorous supporter of choice, invoked lyrics from "Power" by Kanye West to demonstrate the need for women to get off the sidelines and back into the fight. "We must be warriors," Cox said.

Speaking over cheers of support, Cox urged the women in the crowd to fight for their rights. "Be like Alice Paul," she said "be like Rosa Parks." Cox also encouraged attendees to invoke the spirit of all champions of choice, specifically mentioning Barbara Santee. Santee, a long time supporter of the ACLU, is one of Oklahoma's fiercest warriors for women's rights.

The Pink Wave was organized by the Oklahoma Coalition for Reproductive Justice and Planned Parenthood of Oklahoma to protest bills proposed and/or passed this session that lessen women's reproductive choices. Other speakers included several state legislators and community activists for choice.
Related Issues

ACLU of Oklahoma Statement on the Governor’s Comments During Fox...

We won’t stop fighting against attacks on abortion access