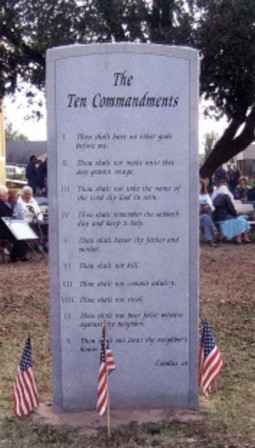 The appeal of a 2006 decision by the U.S. District Court for the Eastern District of Oklahoma to retain a Ten Commandments monument on the Haskell County Courthouse lawn was argued before the U.S. Court of Appeals for the Tenth Circuit in Denver Colorado on October 4, 2007. Daniel Mach, Director of Litigation for the National ACLU Program on Freedom of Religion and Belief, presented the oral argument to the Tenth Circuit. He was advised by Micheal Salem, an ACLU of Oklahoma cooperating attorney who handled the case at the District Court trial with former ACLU of Oklahoma Staff Attorney Tina Izadi.

The ACLU of Oklahoma originally filed the case on behalf of plaintiff James W. Green, who objected to the placement of the Ten Commandments monument on the lawn of the Haskell County Courthouse in Stigler, Oklahoma. Stigler resident Sharon Nichols acted as the representative on behalf of the ACLU of Oklahoma membership. The judge at the District Court dismissed the controversy as a “kerfuffle” and ruled that the monument was not erected by the County with a religious purpose. The case is Green v. Board of Commissioners of the County of Haskell.