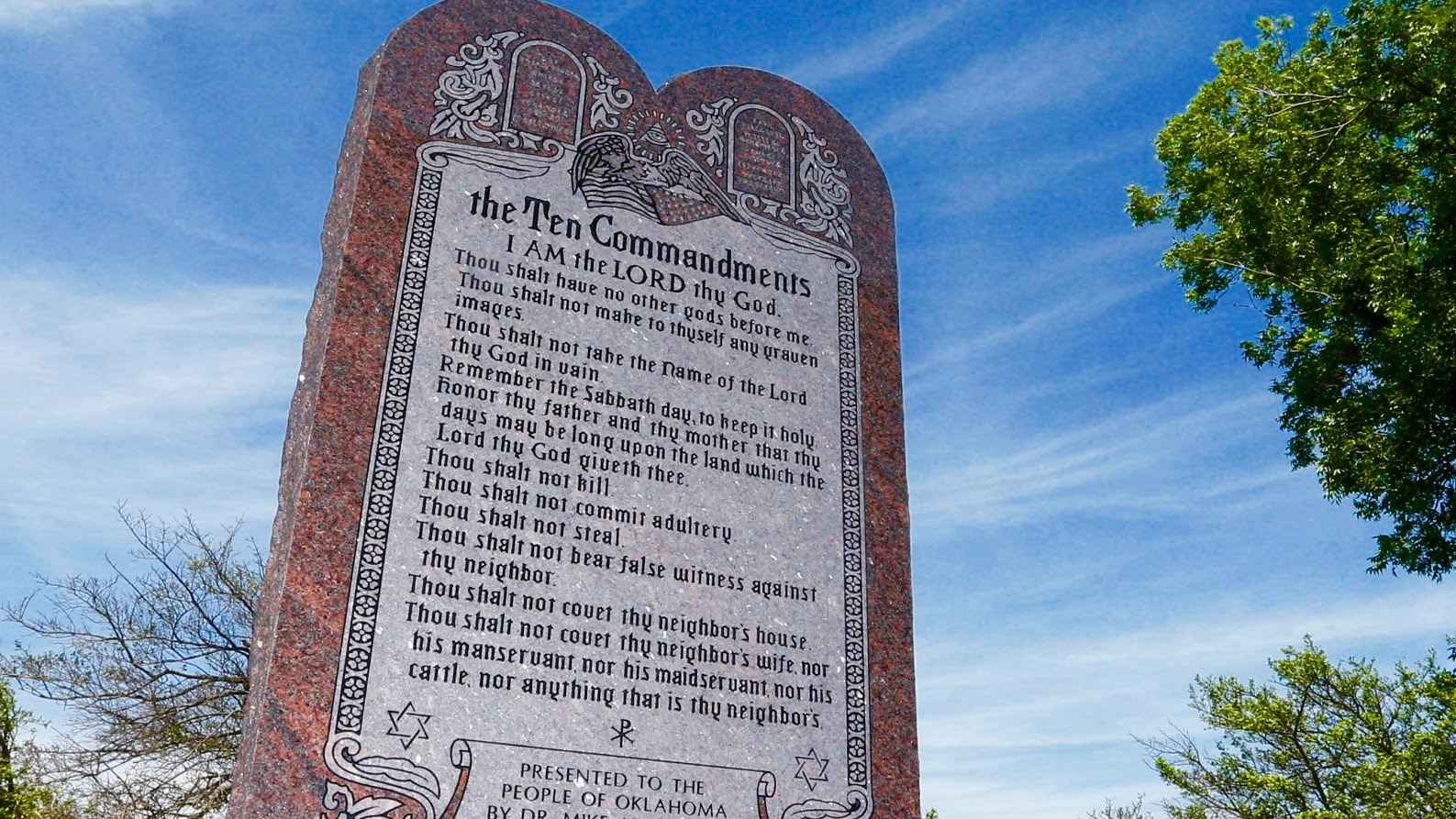 In the wake of the Ten Commandments decision, many Oklahomans rightly have questions about the court case itself and Article 2, Section 5 of the Oklahoma Constitution. And with all of the political posturing coming from various sources, it can be understandably difficult to tell fact from fiction. On behalf of our clients in this case (all Christians who view the Ten Commandments as sacred to their faith) we have been studying this important part of our Constitution for many years, researching the history behind Oklahoma’s Constitution, including reading documents from the very convention that gave birth to our great state. With that in mind, we hope to shed some accurate and honest answers to some of the most frequently asked questions about our Constitution and this important decision.


To help with our very important work, Click here.

Q: Why did the Court order the Ten Commandments Monument in Oklahoma be removed when an earlier decision by the United States Supreme Court let a similar monuments in Texas stay put?

A: It’s true that in 2004 the United States Supreme Court allowed Texas to keep its Ten Commandments Monument. The Court’s ruling was based on the First Amendment of the United States Constitution. In what the deciding Justice called a “borderline case,” a slim majority of the Court found that the context of the monument meant that it did not violate the First Amendment. On the very same day, the Supreme Court looked at the context of another monument in Kentucky and ruled it had to be removed. We invite you to read both opinions about Texas and Kentucky.

However, these rulings were not at issue in the Oklahoma case. The Oklahoma Supreme Court held that the Oklahoma Ten Commandments Monument violated Art 2, Section 5 of the Oklahoma Constitution.

Q: What is Article 2, Section 5 of the Oklahoma Constitution?

A: It is an original part of our State Constitution introduced and adopted with support from community leaders, Christian clergy, and Native American representatives. It is an important limit on government power. It tells the government that it cannot discriminate among religions by supporting any one (or several) religions, churches, or clergy with public property or public funds. The full text of Article 2, Section 5 is short, clear, and easy to understand. Don’t just take our word for it. Read it for yourself here.

Q: Why did the founders of Oklahoma include it in our Constitution?

A: Many Christian ministers and Oklahoma Constitutional Convention delegates supported it to keep politics out of religion, knowing, based on previous experience, that when churches or pastors were funded by the government, political forces often ended up compromising or corrupting their faiths. Many Native Americans and their non-Native allies supported it (and had proposed similar language a at the earlier Sequoyah Convention) in response to abusive practices in which some government-funded religious schools forcibly Christianized Indian children.

To help with our very important work, Click here.

Q: Some people are talking about the “Blaine Amendment.” What is that?

A: The Blaine Amendment was a failed federal constitutional amendment proposed in the 1880’s by a Republican Congressman, Speaker of the House, and failed Presidential Candidate from Maine named James Blaine. The amendment was aimed at ensuring that public schools could not be operated by a church or otherwise under the control of any particular religion. The proposed amendment failed to get enough votes in the U.S. Senate in 1875, effectively killing the proposal.

Q: So what does the Blaine Amendment have to do with Oklahoma?

A: In a word, nothing. It was proposed by a national politician from Maine and failed in Congress more than thirty years before Oklahoma was even a state.

Q: Sure, but several states put similar language to the Blaine Amendment in their State Constitutions.  Is Article 2, Section 5 a state “Blaine Amendment?”

A: No. In fact, Oklahoma’s Article 2, Section 5 is not an amendment at all--it was proposed early in Oklahoma’s Constitutional Convention and adopted as one of the first provisions in our Bill of Rights. It was written and adopted at the Oklahoma Constitutional Convention that began in 1906 and uses language different from the original Blaine Amendment. Our courts and scholars have long understood that the language and ideas of Article 2, Section 5 come from the same basic premise as the First Amendment--freedom from government interference in matters of faith and and prohibiting discrimination based on religion.

Q: But does Oklahoma have a state equivalent to the Blaine Amendment?

A: Yes, but it is in a different part of the Oklahoma Constitution and played no part in the Ten Commandments Monument decision. Article I of the Oklahoma Constitution has a provision about public education that contains a phrase requiring that public schools be “free from sectarian control.” This provision was required by the Republican-controlled United States Congress as a condition of statehood.

Q: I’ve heard that the Blaine Amendment was bigoted and targeted Catholics. Is that true? What does this mean about Oklahoma’s Constitution?

A: Both the failed federal and several state Blaine Amendments have been alleged to have been motivated, in part, to exploit the anti-Catholic, anti-immigrant political environment that existed in the late 1800’s. However, there is no credible evidence that religious bigotry had anything to the adoption of Article II, Section 5 of the Oklahoma Constitution. It came from an entirely different people, place, and time.

But that doesn’t mean we don’t know why the framers included this provision.

Based on the actual records and reports of the Oklahoma Constitutional Convention and the preceding Sequoyah Convention we know full well that the delegates wanted to protect religious liberty from threats by politicians and the government. In addition, the several Native American Tribes in Oklahoma and their non-Native allies were also concerned about publicly financed programs that paid schools run by Protestants and Catholics to forcibly Christianize Native American children in hopes of breaking their young students’ historical bonds with their tribes and assimilate the students into white society. Delegates understandably wanted a constitution that prevented the exploitation of religion for political purposes.

So while Oklahoma’s Constitution may have provisions that share some language with so-called Blaine Amendments in other states’ constitutions, our Constitution is informed by our own unique history and our framers’ efforts at preventing the use of religion as a weapon used by government, while preserving the right of religious liberty for future generations of Oklahomans.

Q: If Article 2, Section 5 is repealed does it mean that the state can keep the Ten Commandments Monument?

A: Not necessarily. If the provision is repealed and the Monument re-erected at the Capitol, it’s likely the new monument will be challenged almost immediately under the United States Constitution. Such a challenge would have a significant probability of success at removing the new Monument, though at the expense of a great deal more wasted tax dollars and unnecessary division and pain for Oklahomans on all sides of the debate.

Q:  Does this ruling mean that the Ten Commandments Monument has to be destroyed?

A: Absolutely not. The Monument can be given back to its donor and relocated to private property. In fact, if the monument is placed on private property and that placement is ever challenged, the ACLU stands ready to defend the Constitutional rights of the owners of the private Monument. The Oklahoma Constitution limits the government’s power to endorse and support specific religious ideas, while at the same time protecting the people’s right to express their faith.

Q: Would amending the Oklahoma Constitution open the door for a Satanic Statue or other religious monuments?

A: Here’s what we know for sure: With its decision in the Ten Commandments Monument Case, the Oklahoma Supreme Court shut the door on the proposed Satanic statute and other obviously religious monuments. Case closed.

Repealing Article 2, Section 5 and re-erecting a new Ten Commandments Monument would re-open that door. That doesn’t automatically mean that the Satanic Temple would be successful, but it would restore the possibility. Almost certainly there would be additional chaos, new applications, and a host of unintended consequences that go along with removing longstanding and fundamental law.

Q: Speaking of unintended consequences, I’m worried that the ruling in this case will jeopardize Native American art on public grounds or government payments to faith based hospitals. What gives?

A: Rest easy. The Native American art on public grounds is safe. Nothing in the Court’s decision concerning the Ten Commandments monument endangers the maintenance of historical items just because they acknowledge or mention something that could be religious. The decision simply enforces the Constitution’s ban on government discriminating among religions by explicitly endorsing the message of one religion over another. The Ten Commandments Monument very clearly commands anyone reading it to worship God in a specific way. The Constitution forbids government support for the unmistakable religious message like the one in the Ten Commandments Monument. The Constitution does not block the simple mention or acknowledgment of religion.

Government reimbursements for services at faith based hospitals, and any other instances of the government transacting normal business with religious organizations are also safe. In fact, the ACLU of Oklahoma recently weighed in on a case in which a police officer was fired because he refused to serve a particular part of his community because of their faith. We said that sort of discrimination in the delivery of government services, including fire departments and police departments, was illegal and the courts agreed.

Sounds like a bunch of politicians are making over-the-top statements to get headlines and aren’t really thinking this thing through. Right?

A: Correct you are.