Why You Should Care About NSA Surveillance 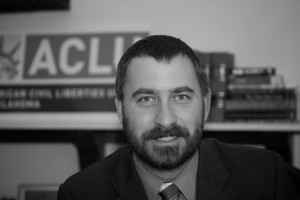 There’s a knock on your door. You answer it to find an agent from the NSA. He politely informs you that he is there to enter your home, go to your computer, and collect your internet browsing data. He is also going to collect your activity on Facebook, twitter, and other social media sites. After gathering information from your computer he demands your cell phone. He copies your call history and text messages, and informs you that your conversations, past and present, may be subject to monitoring and recording. Afterwhich, he politely thanks you for your time and moves on to your neighbor’s house.

This is no dystopian future. It is a more forthright version of the present that attorney Ramzi Kassem uses in a recent episode of This American Life to illustrate what the NSA’s surveillance program might look like in more literal and physical terms. Beginning under the Bush Administration and continuing under the Obama Administration, the NSA has been engaged in similar widespread surveillance practices, but rather than knocking on your door, they have been sending orders from a secret court to your internet providers, phone companies, social networks, email providers, and internet search services. And instead of telling you that they were taking this information, the government has actively lied to the American public and to Congress, first about the existence of the program, and after leaks about its existence made it impossible to continue those lies, they began to lie about the scope of the surveillance.

In the wake of these revelations, I’ve been surprised by the number of otherwise staunch civil libertarians of all stripes, ranging from diligent liberals to devout conservatives, whose response has been apathy instead of outrage. They have noted they have nothing to hide, that their internet lives are boring, and their phone conversations are nothing that would raise the eyebrows of government agents who are ostensibly using their surveillance authority to target non-citizens suspected of planning violence against American interests.

Their apathy is often immune to arguments that if the government lied about the very existence of the program to congress just a few months ago, they could very well be lying about who is being targeted for surveillance, or that this is simply an initial step towards a broader surveillance program that would include their conversations. Again, they say, with nothing to hide, it seems an insignificant trade off in the name of national security.

So leaving aside for the moment the idea that the NSA and their partner agencies could already be reading your text messages or looking beyond your public posts on Facebook, or that they might in the very near future, it is important to remember that as boring and benign as your personal life may be, studies have shown we change the way we behave and communicate when we think we might be under surveillance. This doesn’t just mean you’re less likely to plan a bank robbery over the phone or using your Gmail account. It also means you may find yourself, consciously or subconsciously, reluctant to discuss a sensitive medical issue with a family member over the phone.

As one American citizen, a lawyer for a Guantanamo detainee, who knows their phone calls are being listened to, recently said in the same episode of This American Life, you may find yourself not saying that silly, yet meaningful, thing to a loved one if you’re aware a stranger is silently listening to your conversation. Neither the medical condition or the whispering of silly-nothings is wrong. Neither subjects you to criminal liability. But they are communications we might not make if we did not feel that they were private. In short, even the saints among us with nothing to hide, should be concerned that their ability to form and preserve emotional connections with family, friends, and loved ones may fall victim to self-conscious censorship. Squelching the ability to have candid conversations, to build and strengthen emotional bonds in private, is not a trivial sacrifice.

However, the question of whether that trade off is worthwhile is not one the American public has been able to weigh in on in an informed manner. After a thorough debate Americans may be willing to make that sacrifice if they felt it was worth the preservation of national security. I doubt they will and I will do my best to persuade them otherwise, but the point is moot until American society has had a chance to examine the issues at hand.

Part of that informed decision should ask whether we can we quantify the benefit of warrantless surveillance in a manner that would actually allow us as a society to weigh their benefits against the loss of privacy. This balancing can only occur before such programs become the new normal and distort our expectations of privacy to the extent that we irreversibly abandon those expectations of privacy. Once a society has become accustomed to a decreased level of privacy, it is incredibly difficult, and in many instances impossible, for us to reclaim that privacy. This makes it all the more important that we engage in these debates now.

It can be argued that this debate has already occurred. That as a society we agreed that some privacy rights may be derogated for the sake of national security, and that the appropriate balance was struck by requiring judicial review. The FISA courts that were created to review these request do offer a level of scrutiny that is better than simply allowing the executive branch to conduct unchecked and unreported surveillance. But not by much. FISA seems to operate as nothing more than a rubber stamp. I say seems, because FISA is itself so secretive that we are unable to test whether it is a robust balance to the surveillance powers sought by the executive branch. Recent decisions by the Supreme Court have made it even more difficult to peer into the workings of the court or to subject their orders to further judicial scrutiny. A recent Kafakaesque decision by the Supreme Court holds that one cannot challenge a FISA order unless one can prove that they have been the subject of FISA ordered surveillance. Given that the FISA orders are classified and that the nature of surveillance is such that it is unlikely a person can demonstrate that they were the target of surveillance, we've essentially transferred unilateral, unreviewable surveillance authority from one branch, the executive, to another, the judiciary.

Until we have an idea of what it is we are giving up, what protections that sacrifice offers, and whether there are other viable approaches to intelligence gathering that don't have the same apparent infirmities of the current process, it's difficult to conclude that the current course is the best course. The status quo, which makes it impossible to know whether there have been abuses, is an impediment to that informed debate.

The ACLU is now leading the way to challenge the NSA’s surveillance program on three legal fronts: in our ongoing FOIA litigation seeking the government's secret interpretation of the law; in the FISA Court through a public-access motion; and now, in a constitutional lawsuit in federal court.