Oklahoma’s Failure to Protect Law and the Criminalization of Motherhood

When Kerry Lalehparvaran, a Black woman, awoke late one night in January 2015 to find her boyfriend gone from their room, she got up to find where he had gone. She found him standing over her daughter, hands on her shoulders, holding her down as she whimpered. Kerry fought to get him off her, but he fought back and dragged her down the hallway. He then started spanking her daughter. Kerry put herself between her daughter and the swinging belt, but the swings kept coming. Eventually, he managed to take Kerry’s keys and phone and lock himself and her daughter in the bedroom.

When she tried to escape the house to find help, her boyfriend heard her and physically prevented her from leaving the house. The next morning, Kerry’s roommate arrived and upon seeing the situation, fought the boyfriend, but lost when her keys and wallet were taken away. She eventually managed to escape and called the police, who arrested Kerry’s boyfriend and took her to Tulsa’s child advocacy center where the State took custody of her two youngest children, including her abused daughter. Kerry was arrested a week later for failing to protect her daughter, while her own back still bore the bruises of intercepting the swings of her boyfriend’s belt. Her boyfriend was convicted of child abuse and sentenced to 18 years in prison with 7 years of probation. Kerry was sentenced to 30 years in prison for failing to stop his abuse.

Situations like Kerry’s are common in Oklahoma, where the incarceration rate of women is the highest in the world – and has been for decades. In addition to relying heavily on incarceration to disrupt behavior, Oklahoma has a culture of holding women responsible for child-rearing. When children are abused, women are criminalized for surviving. For many women, especially women of color – whether they report or seek care for themselves – the moment they become involved with the criminal legal system, their own victimization is criminalized and their children taken away. In many cases, like with Kerry, women are victims of the same abuse for which they are incarcerated.

Specifically for Oklahoma’s Failure to Protect Law, where a caretaker is charged with failing to protect a child from someone else’s abuse, women are sentenced to an exuberant and wide-ranging amount of time in prison. 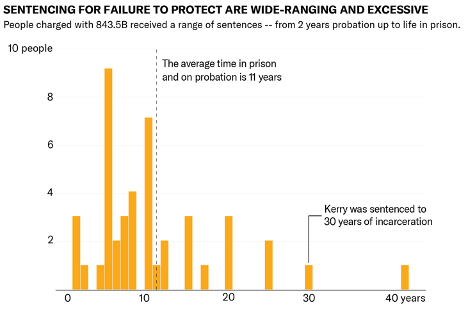 “I Didn’t Permit Anything” – The Incarceration of Kerry Lalehparvaran1

Long before the incident leading to her arrest, Kerry was the target of her boyfriend’s abuse. He reacted violently toward her. He threatened to kill her. On more than one occasion, he stuck a gun in her mouth. Her life was a state of constant fear and anxiety.

However, Kerry and her boyfriend were prosecuted as co-defendants. They had the same prosecutor and the same judge. The prosecutor refused to offer either of them a deal, asking for the maximum sentence for both child abuse and failure to protect – life in prison. Kerry’s boyfriend eventually pled guilty to child abuse after spending a year in jail.

Kerry decided to fight her case. “I wasn’t going to do anything but take it to trial,” Kerry said. “I wasn’t going to plead guilty to something I didn’t do….I didn’t permit anything.”2  Kerry’s case went to trial almost a year after her boyfriend was sentenced and two years after she was arrested. Despite Kerry’s boyfriend receiving a total of 25 years for child abuse, the prosecutor continued to argue that Kerry should receive life in prison for failing to stop it. To support her request for the maximum sentence, the prosecutor stated, “Well, she’s her mother.” Kerry was sentenced by a jury to 30 years in prison, a sentence that would keep her away from her children during the most important years of their lives and likely keep her locked up for the rest of her reproductive years.

Oklahoma’s Failure to Protect
Oklahoma has criminalized the failure to prevent or report child abuse since 1963. The crime carries a maximum of life, which is high compared to other crimes. 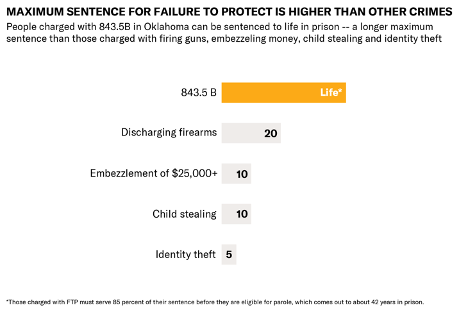 The law applies not only to parents or guardians, but to any person. It doesn’t take into account situations like duress or experiencing domestic violence from the person committing the child abuse. While the child abuse itself must be “willful or malicious,” Failure to Protect only requires that the person “knows or reasonably should know” of a “risk” of child abuse.

Prosecutors have also argued that a woman should have known the risk because she was in an abusive relationship with the man accused of child abuse – essentially using the fact that she survived violence as evidence that she knowingly permitted child abuse. This is untrue. Domestic violence is about power and control. People enduring domestic violence are told repeatedly that the abuse and violence they are experiencing is their fault and eventually, they believe it. Because people experiencing domestic violence believe the abuse is their fault, it is not logical for them to assume that the violence is extending to their children. In their eyes, they are deserving of the abuse; their children are not.

Authors and supporters of Oklahoma’s Failure to Protect Law state it was written to incentivize people in abusive relationships to leave and that it is necessary to protect Oklahoma’s children. Experience has shown that neither is true. Leaving an abusive relationship is not as simple as walking out the door. Fear of the person responsible for the abuse,3   lack of financial resources,4  isolation from support systems,5  distrust of the legal system,6  and guilt and shame around experiencing7 abuse all act as barriers to seeking help. Deciding to leave can be extremely difficult, and leaving creates its own dangers. The risk of being killed by an abusive partner increases significantly when a person attempts to leave.8

Ultimately, Failure to Protect places an additional barrier to seeking help. People in abusive relationships fear they will be criminally prosecuted if they come forward about their abuse. They also fear losing custody of their children, which can result in foster care placement.

Not only are women held criminally responsible for the behavior of their male partners, they are often punished more harshly for it. One in four women convicted of failure to protect will receive a longer sentence than the person responsible for the abuse. 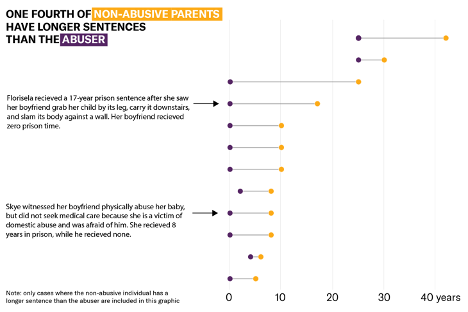 At least 50 percent of women convicted of failure to protect – including Kerry –  were also abused by the same man who abused their children. Rather than receiving resources and support, they are prosecuted as co-defendants. Often, survivors of domestic violence are then incarcerated for failing to stop the crimes of their abusive partners and are separated from their children.

Kerry Lalehparvaran’s case is tragic and unjust. And it is not unique.

Methodology
ACLU of Oklahoma contracted with Code for Tulsa to data scrape Oklahoma’s online court network (OSCN). Code for Tulsa did a search for terms relating to failure to protect for cases across Oklahoma from 2009 – 2018, the date the crime was recodified through the end of the year prior to the search.

While the data scrape included cases from all of Oklahoma’s 77 counties, only 13 counties supplied the data in a reliable and consistent format. The information given above relies upon information from those 13 counties. 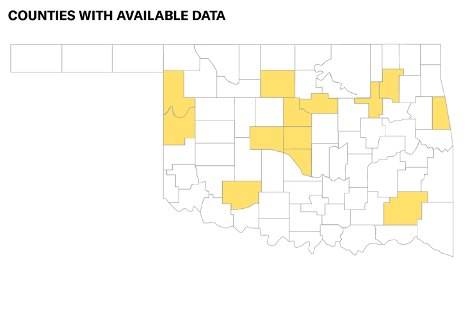 The gender of each person was estimated using the percentage of the US population with the same first name who are men as compared to the percentage who are women. For people sentenced to a term of incarceration, that estimate was verified by the data provided on Oklahoma’s Department of Correction’s website. The gender of a person was further verified on an individual basis by the pronouns used in the probable cause affidavit.

All information discussed, with the exception of certain details of the facts leading up to Kerry Lalehparvaran’s arrest, are public record.